THE ANTHONY BURRELL CENTER FOR DANCE IS NOW OPEN! CLICK HERE TO ENTER! 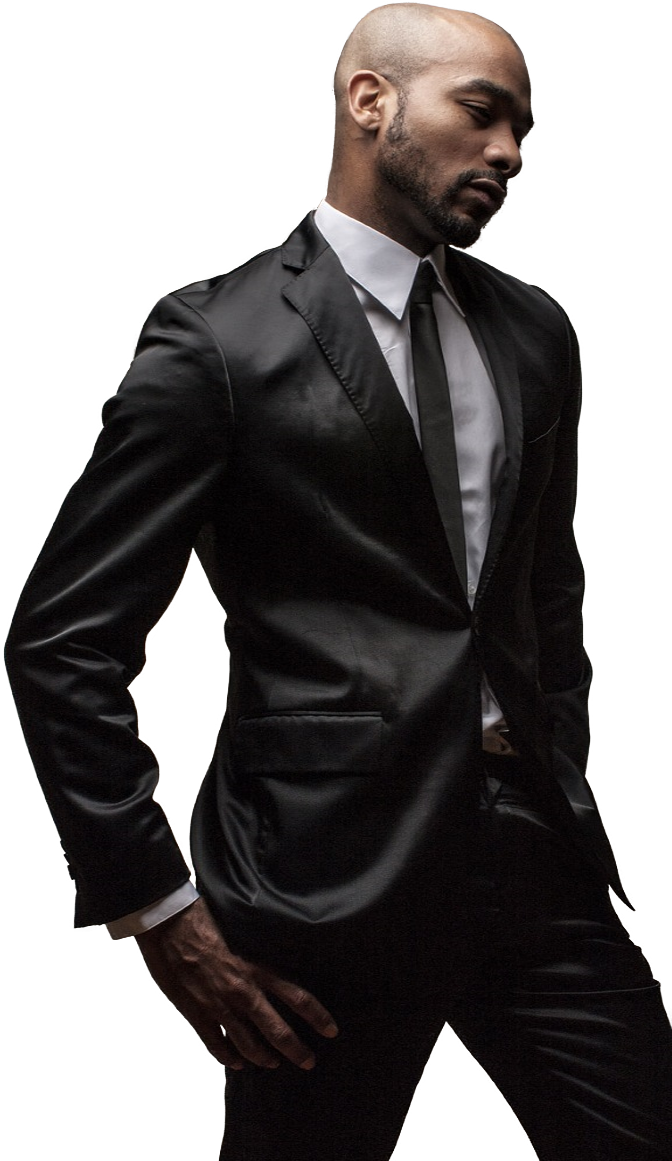 Anthony Burrell is a Philadelphia born Creative Director, Choreographer, and Actor. He is seen as the creative force on E! Entertainment for Mariah’s World, Mariah Carey’s Vegas Residency 1 to Infinity, Sweet Sweet Fantasy Tour, Un-Silent Night Christmas, and All I Want for Christmas at the Beacon Theater. Anthony is part of the artistic team behind Beyonce’s Super Bowl 50 halftime show, MTV Music Awards (2016), Country Music Awards (2016), The Formation World Tour, and countless music videos. He has won an MTV Video Music Award for ‘Best Choreography’ in Beyonce’s ‘Formation’ and was also nominated for ‘Best Choreography’ in Beyonce’s ‘Sorry’. Anthony’s recent film credits include Lemonade, Bad Grandpa, Jack Ass 4, and Leave It On the Floor.

Anthony is renowned for his ability to blend classical and commercial dance styles, choreographing for notable companies such as Pepsi, Direct TV, DKNY, and Ivy Park. His unique style has also been seen with a long roster of artists such as Prince, Stevie Wonder, Rihanna, Katy Perry, Jennifer Lopez, Brandy, Destiny’s Child, Mary J Blige, Kesha, Jennifer Hudson, En Vogue, Jay-Z, Jussie Smollett and more. Anthony made his Broadway debut as ‘Hank’ in Twyla Tharp’s Broadway Musical “Come Fly Away and Co-starred the film ‘The Skinny’.

Anthony has choreographed and performed in many pivotal moments in dance entertainment. His choreography has been featured on popular shows such as Raising Asia, Abby Ultimate Dance Competition, Good Morning America, The Oprah Winfrey Show, So You Think You Can Dance Top 24, Dance Moms, GLEE and Fox’s hit series Empire. The New York Times Jennifer Dunning names Anthony as a “Young Choreographer to Watch.”

Anthony has danced with Philadanco, Eleone, Koresh, Prism Dance Theater. Anthony was also a two-time gold medalist and the 1998 National Gold Medalist for the NAACP ACT-SO competition in the category of Dance. While attending University of the Arts, Anthony was hand selected by Artistic Director Emeritus Judith Jamison to join Ailey II and The Alvin Ailey American Dance Theater. As a principle dancer, he has performed in the MasterWork Revelations for President Barack Obama and the first family.

In addition to his successful career, Anthony dedicates himself to dance education and Philanthropy as the Founder and Director of Breaking Barriers Summer Dance Intensive and Project AB. He continues to build his artistry and work towards creating a legacy in entertainment, arts, and education. 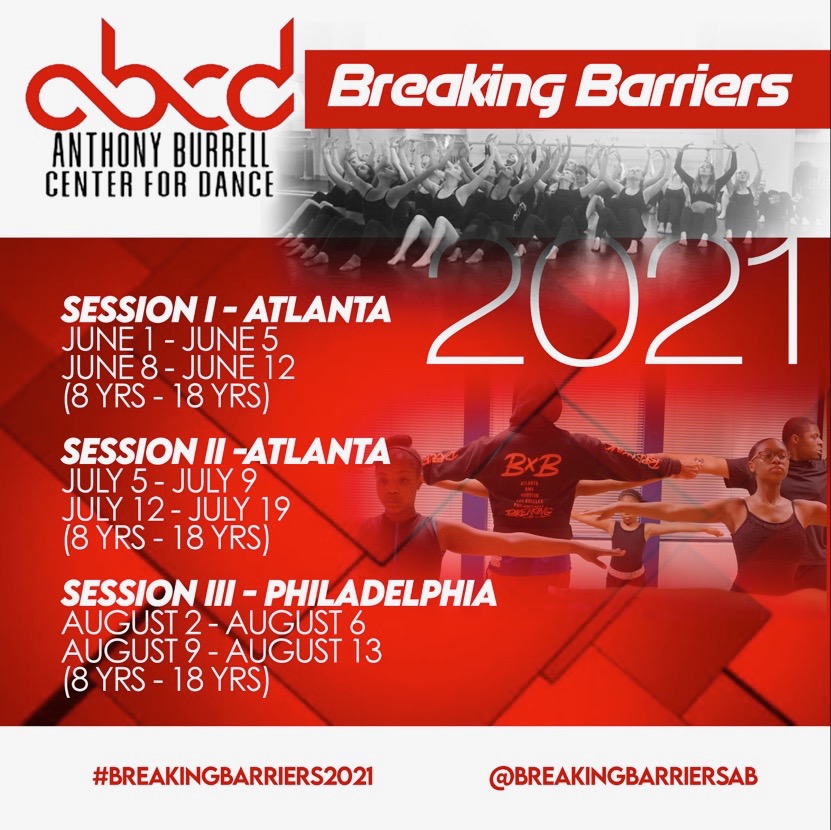 Dancers both nationally and internationally flock to BREAKING BARRIERS to be trained, inspired and mentored by Anthony Burrell and his world-renowned faculty. Students work to improve their technical skills and broaden their artistic horizon with dance knowledge/terminology over the course of the 2 week program. Each week of training will consist of 40 hours to include Contemporary, Vogue, Street Jazz, etc. and workshops designed to learn various iconic music video and tour choreography. The Intensive culminates in a spectacular showcase which demonstrates all the hard work and dedication put forth in the previous weeks.

BREAKING BARRIERS Dance Intensive schedule is Monday through Friday from 9 a.m. - 5 p.m. The program will consist of Ballet, Horton, Contemporary, Jazz & Tap. In addition, students will have mock audition, resume building, dance history and can expect an array of surprise guest teachers, artists, lectures, choreographers during the week. Students will showcase choreography learned throughout the week during the final performance. 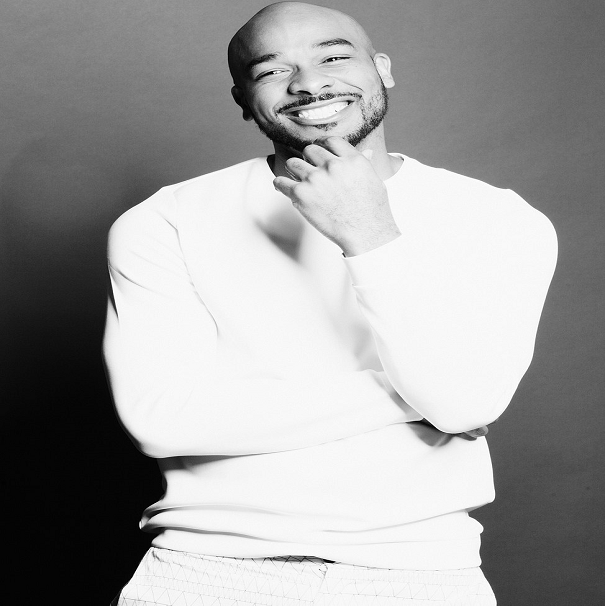 "I stopped eating meat when I rejoined the AAA Dance Theatre in 2008. After a five-year hiatus from the company I gained 30 lbs of "man meat." Letting meat go, allowed me to lose 20 of those lbs."

" I was part of the choreographic team rejuvenating one of Vegas' longest running shows, 'Jubilee' at Bally's Hotel and Casino"

"I never take vacations! A vacation to me is sleeping in my own bed more than three consecutive nights (which rarely happens)" 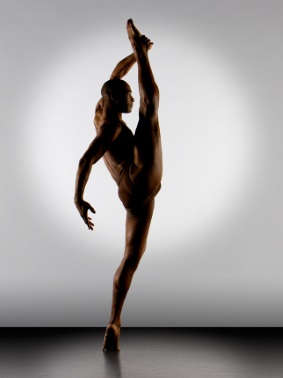 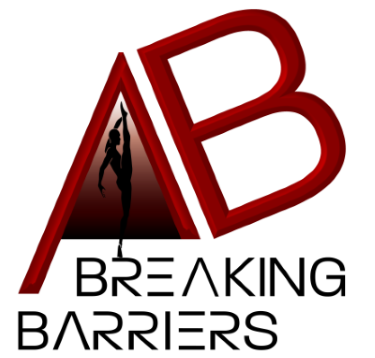 For booking professional engagements, please fill out the form below or email assistant@anthonyburrell.org